Ask anyone in a consulting capacity if they solve complex problems for their clients and the answer will almost certainly be ‘yes’. It wouldn’t sound terribly compelling if they said they solved simple problems, would it? 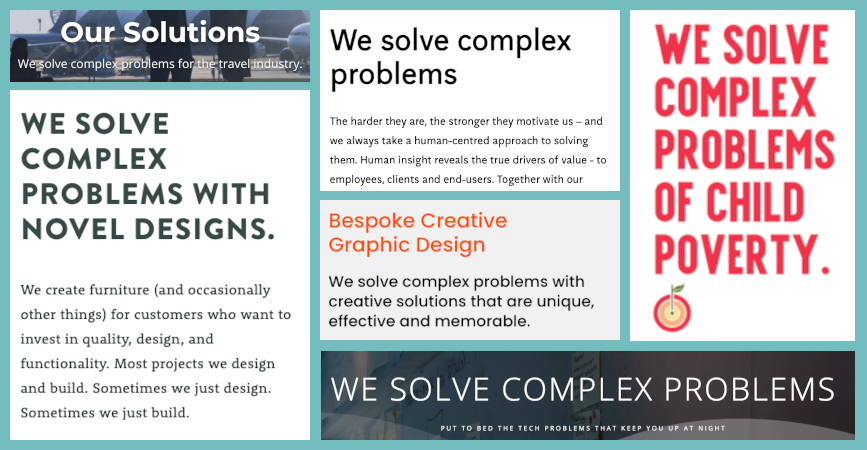 They all say they solve complex problems. But when we start to analyse it, are the problems they solve truly complex? Or are they just complicated?

In this article, we look at some of the characteristics of complex problems and compare them with those that are merely complicated. The distinction matters, because a problem’s level of complexity drastically changes how you approach tackling it.

So, when is a problem complex, and when is it just complicated?

Characteristics of a complex problem.

When thinking about the complexity of a problem, consider the following attributes:

Let’s look at all four in detail.

Complicated problems are difficult to solve, but are easy to define. Building a car is a complicated problem – there are hundreds of structural, mechanical, and electrical components to construct to successfully build a car. But the problem/goal is very easily defined. We want the ability to get from A to B and to do that we will build a car.

With complex problems, however, it is often difficult to define what the problem actually is and therefore what needs to be achieved. There may be multiple interacting problems at play; some obvious and some less so. It may also be difficult for individuals or groups involved in a project to agree on the relative importance of these interacting problems. Worse still, there may be unknown unknowns – problems that exist but nobody can see.

For example, we recently assisted the Alzheimer Society of Canada by consulting on the development of their new website. One of the most time-consuming aspects of the project wasn’t the design and the build of the website, in fact, it was defining the problems that needed to be solved. With multiple opinions, from fundraising to programs and services, to education and advocacy, to research, to marketing… everyone had their own view of what the problems were and the goals that needed to be achieved. Separate groups, all with a different understanding of the problems at play. This means they all, understandably, approach these problems with a different lens and therefore develop goals from their own, unique perspective.

Working through these often competing priorities is of critical importance in projects, which is often overlooked. This causes projects to veer off track, or require substantial rework further down the line. The best approach in these projects, where there are multiple actors with competing or even conflicting priorities, is to seek to build a common understanding across groups and work to define whatever you can (bearing in mind that you may never achieve a ‘perfect’ definition). Also of critical importance in this situation is an outside opinion, to uncover those ‘unknown unknowns’. Talking to real-world users rather than making internal assumptions usually serves to uncover problems you had never even considered.

A complicated problem can usually be broken down into its constituent parts. Staying with our car analogy – a car is complicated because it has lots of components that work together, but it isn’t complex. You can literally break it down into its individual parts, put it back together again, and you have the same car. A complicated problem can often be referred to as existing in a ‘closed system’, that is, you can define where the system starts and where it ends.

An example of this is in the marketing world. When starting on a project, it may appear simple. Do X to achieve Y. However, it is important to think holistically if you want to understand the total impact of the project. For example, what other projects are running at the same time? How do those projects impact this one, and how does our project impact them? What has happened in the run-up to this project? And once this project is finished, what is likely to happen next?

With a complicated problem, it is usually easy to predict what is going to happen. The process of building a car is not easy, but we know how one component of a car should interact with another. Therefore, we can predict what is going to happen. We can do that from experience. If you have built a car several times before, you can draw upon your past experience to predict what will happen again. And you don’t even need to have built a car yourself, because lots of other people have done it before and you can feed off their experience. Have you ever done any complicated DIY after watching a few YouTube videos? You’ve just solved a complicated problem by feeding off someone else’s experience.

In a complex problem, it is often hard to predict what is going to happen. Just because something happened before in a previous project, doesn’t mean it will happen again in the same way. This could happen for many different reasons, for example, cultural/geographic differences, the use of novel technology, political differences, sketchy background data, or team stability, to name just a few.

If you want to learn more about predictability, check out Dave Snowden’s Cynefin framework which talks about the relationship between cause and effect. Raising children sits well within the complex domain, as does leadership. Sending a rocket to the moon, however? That’s complicated, but not complex. Think about that the next time someone quips, “it’s not rocket science”.

One of the major issues with predictability is unintended consequences. It is hard to predict what is going to happen. So, how you approach a problem can sometimes spawn other complex problems which then cause further instability within the original problem.

Covid-19 is the epitome of a complex problem, for all four reasons outlined in this article, but largely due to its unpredictability. For more than a year governments around the World have been reacting to a constantly moving beast – new variants, vaccine issues, sociopolitical issues, struggling economies, and the unintended consequences caused by decisions on how to handle the pandemic. It is hard to get more complex than this.

Dealing with unpredictability in a digital marketing world can be handled in a few ways:

Because complicated problems can be easily defined, broken down into their individual parts, and are easy to predict, they are usually solvable.

‘We solve complex problems’, however, is often a bit of a misnomer, because many complex problems can rarely be solved, they can merely be addressed. For example, if you can’t easily define a problem, and you can’t set a concrete goal, how do you know when the problem has been solved?

Furthermore, the extent to which a complex problem can be solved is often influenced by several external factors. Do we have access to the right people? Is the project backed by people who can make decisions? Is the budget appropriate? Can you use that budget flexibly to allow for experimentation? Is the timeline adequate? Is the project reliant on the success of some other project, or on the success of a third party?

In a constantly moving and changing environment full of unpredictability, rather than trying to create a ‘definition of done’, it is often preferable to specify sub-goals – things that you are sure will improve your situation relating to the problem – and then aim for incrementally better with regards to those sub-goals, rather than to aim for solved.

Getting the best out of data in aged care.