This year’s Pause Fest was held 7 – 11 February. I attended day one. Even though I was only there for a portion of the full program, it was still jam-packed with inspiring speakers. Bouncing between stages, I learnt about typefaces with political preference, the role of artificial intelligence in cinema trailers, and the benefits of ugly, confusing, and wasteful design.

The fest, which describes itself as ‘Australasia’s premier creative, tech, and business event’, was pretty schmick from the get-go.

A lot of time, thought, and, experience obviously went into achieving the level of quality on display. It’s clear that the Pause Fest team wasn’t playing around.

Day one saw speakers from Netflix, The Mill, Amazon, Thinkerbell, IBM, ARS Electronica, and more. There were plenty of benefits beyond the presenters too.

The space at Fed Square was dotted with helpful event staff, awesome branding and design, great coffee, and plenty of incredibly useful power sockets for my juice-hungry devices.

After all, if a technology event takes place in the forest, and no one is there to voraciously document every minor detail of the experience with a phone or tablet, did it really happen? 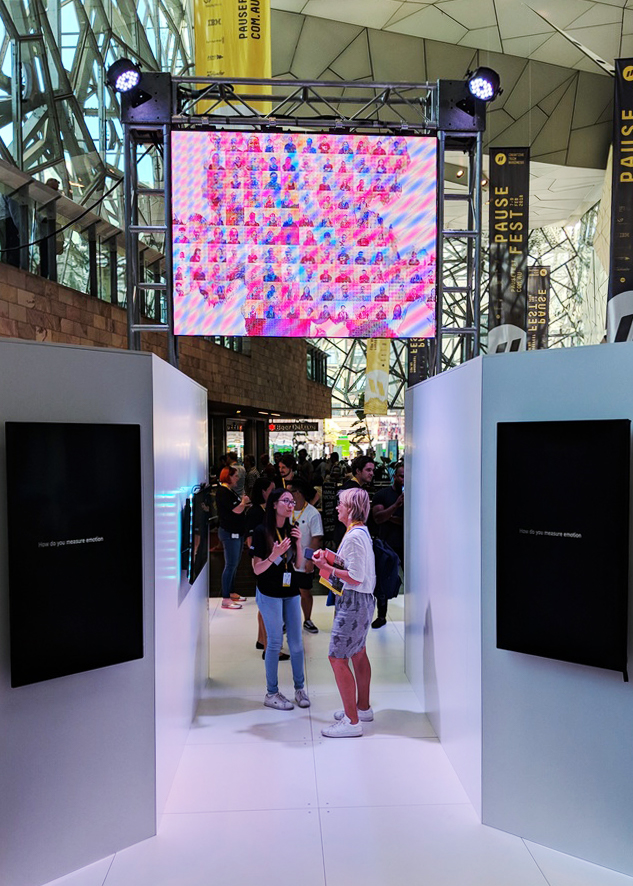 While pondering such important existential quandaries, I also managed to catch eight different speakers on the day. Attending so many presentations did mean bouncing around. Admittedly, I left early and arrived late for most; that’s the price you pay when there are so many interesting speakers on show.

Here’s a little of what I learned.

The top 10 mistakes made by entrepreneurs.

The first talk I went to—and probably the most well-known ‘name’ on the lineup over the course of Pause Fest’s duration—was Guy Kawasaki.

A bona fide marketing icon, author, and general commentator, Guy has worked for a host of tech and creative heavyweights including Apple, Google, and plenty more.

After some momentary technical issues (almost mandatory at an event celebrating the latest innovations in technology), Guy was beamed into Melbourne from his desk in Palo Alto.

1. Focus on the pitch, not the product

Too many budding entrepreneurs spend their time perfecting the product, forgetting that the pitch is just as vital. If your sales pitch falls flat, no one you get in front of is going to get behind you.

Apparently, you should only ‘eat what you kill’. Don’t plan a grand banquet (i.e. pin your hopes on a huge sale somewhere down the pipeline). Instead, wait until you get a customer signed up and then…yeah…eat them.

One piece of advice that resonated with me, and probably anyone who has had people looking to ‘form partnerships’—pah—is: don’t. Guy calls bullshit; he suggests you should call a spade a spade and always focus on sales instead! Simples!

Guy calls this the Steve Jobs’ approach. The Apple visionary never built his career with an intention to take over technology, phones, movies, or music. Instead, he set out to make a well-designed computer, and the rest fell into place as a happy coincidence. Mark Zuckerberg on the other hand…

5. Don’t put too many slides in your pitches 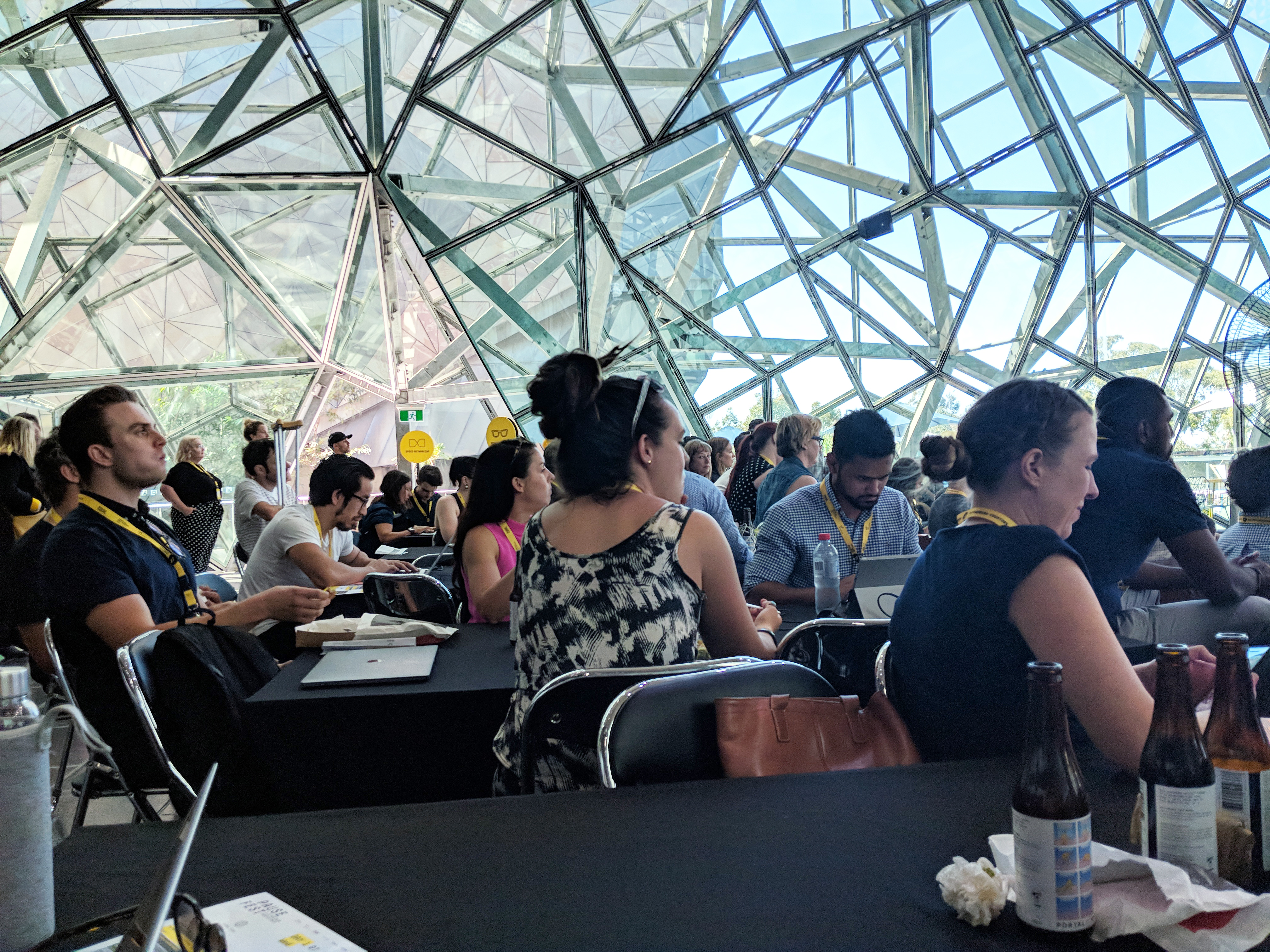 Leaving Guy’s presentation early, I made my way across Federation Square to the ACMI cinema space to catch the second half of a very enjoyable presentation from Australian Type Foundry Director, Wayne Thompson.

In front of a packed crowd of designer types, Wayne discussed the font (I thought we had to call them typefaces?) he created for the ABC (Australian Broadcasting Corporation).

The project lasted two years. The end results? The final font featured 11 different varieties in the family, 4,345 characters, and took Wayne 21 beta versions before he got it right. 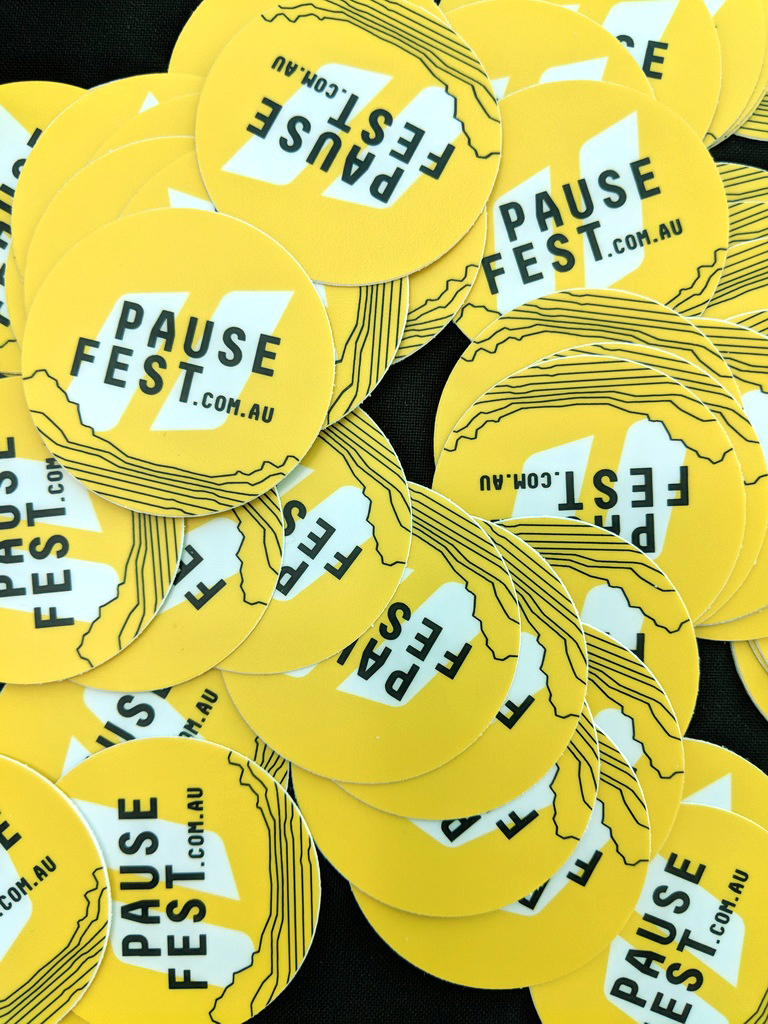 As with a lot of design work—especially when it’s paid for by the taxpayer—there was a fair amount of criticism on the final reveal. Australian political commentator Chris Kenny apparently asked why the ABC couldn’t make do with Comic Sans or Times New Roman…

The cost of the ABC’s font development was attacked but, as Wayne pointed out, it’s cheaper to design your own font rather than pay the ongoing costs of licensing someone else’s.

It was a highly engaging talk, rounded out with a particularly amusing anecdote. Apparently, Wayne initially wanted a ‘reverse italic’ font for the ABC; reverse italic being appropriate because it ‘leans to the left.’ 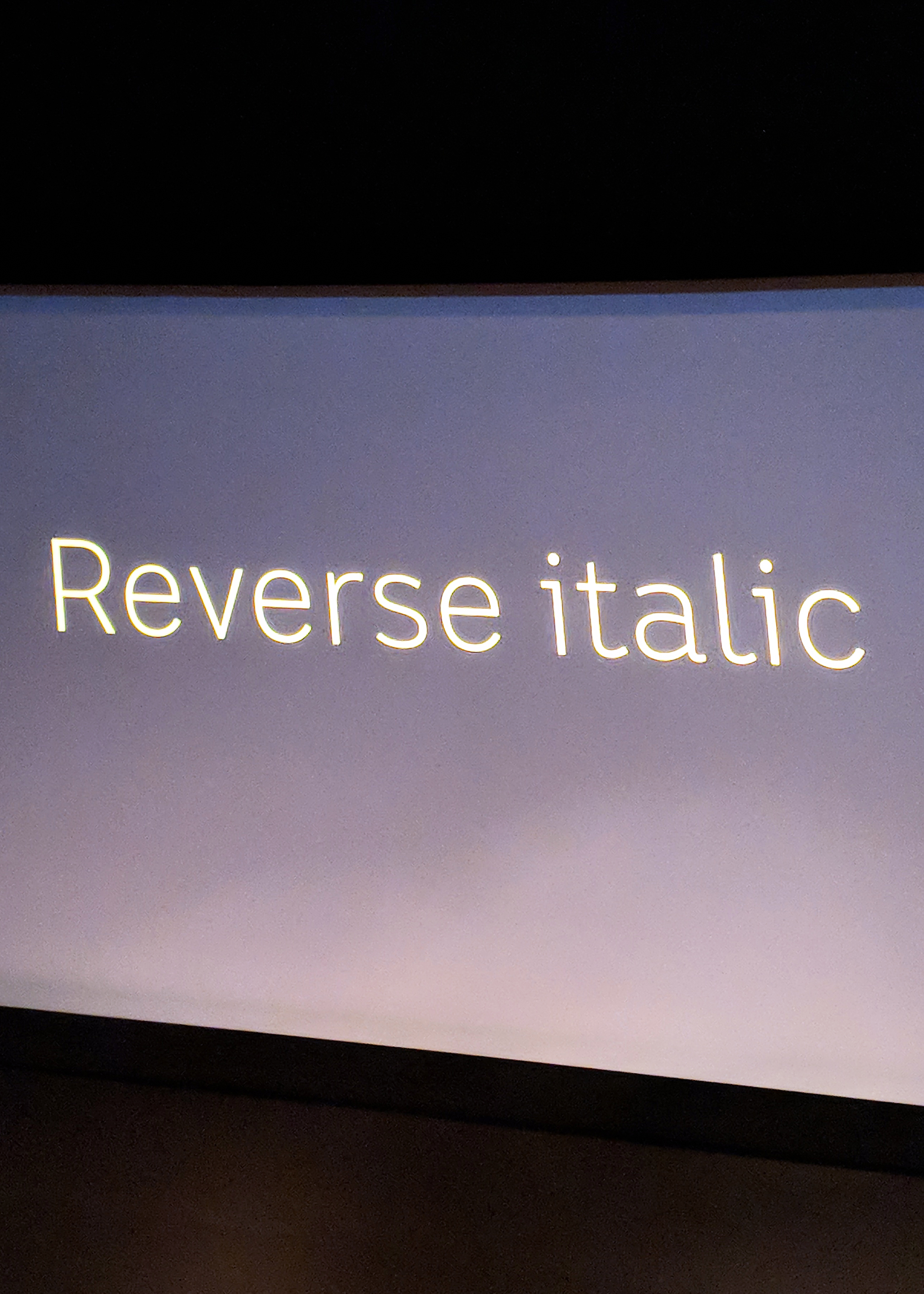 How Steve Jobs took Pixar on a magical journey to the stars.

I’m a massive Pixar fan—who isn’t? —so I was eager to hear about the inner workings of the company from someone who was there for 22 years. And, vitally, worked on the excellent Finding Nemo.

Brian opened with a little of his personal background. He reminisced on being the first guy in Australia to get a Macintosh computer when they initially released, and the street cred this bought him from the neighbourhood kids. Those were the days. I’m not sure you’d get much street cred now flashing an iPhone X around.

Much of Brian’s talk focused on the environment and culture that Steve Jobs created at Pixar. He discussed the campus-style location: the swimming pools, basketball courts, yoga classes and gyms, and how everything was designed to keep the team healthy, to ultimately enhance their creative output. He talked about Steve Jobs’ ethos of celebrating mistakes, and his amazing ability to surround himself with the best of the best.

Overall, it was an interesting insight into the ingredients for the world’s most innovative computer animation studio.

Why there is no value in efficiency.

Back to the ACMI Cinema to hear from Adam Ferrier, the marketing guru of Gruen fame.

Unsurprisingly for anyone who’s watched him on the small screen, Adam is a very engaging presenter. His delivery may be laid back, but his content is solid as a rock.

Adam argued against the growing trend of design methodologies that base their approach around the needs and wants of the user, including human-centred design, Design Thinking, CX, UX etc.

Given that Pause Fest typically attracts people either working or interested in those areas, this was a cat amongst the pigeons. 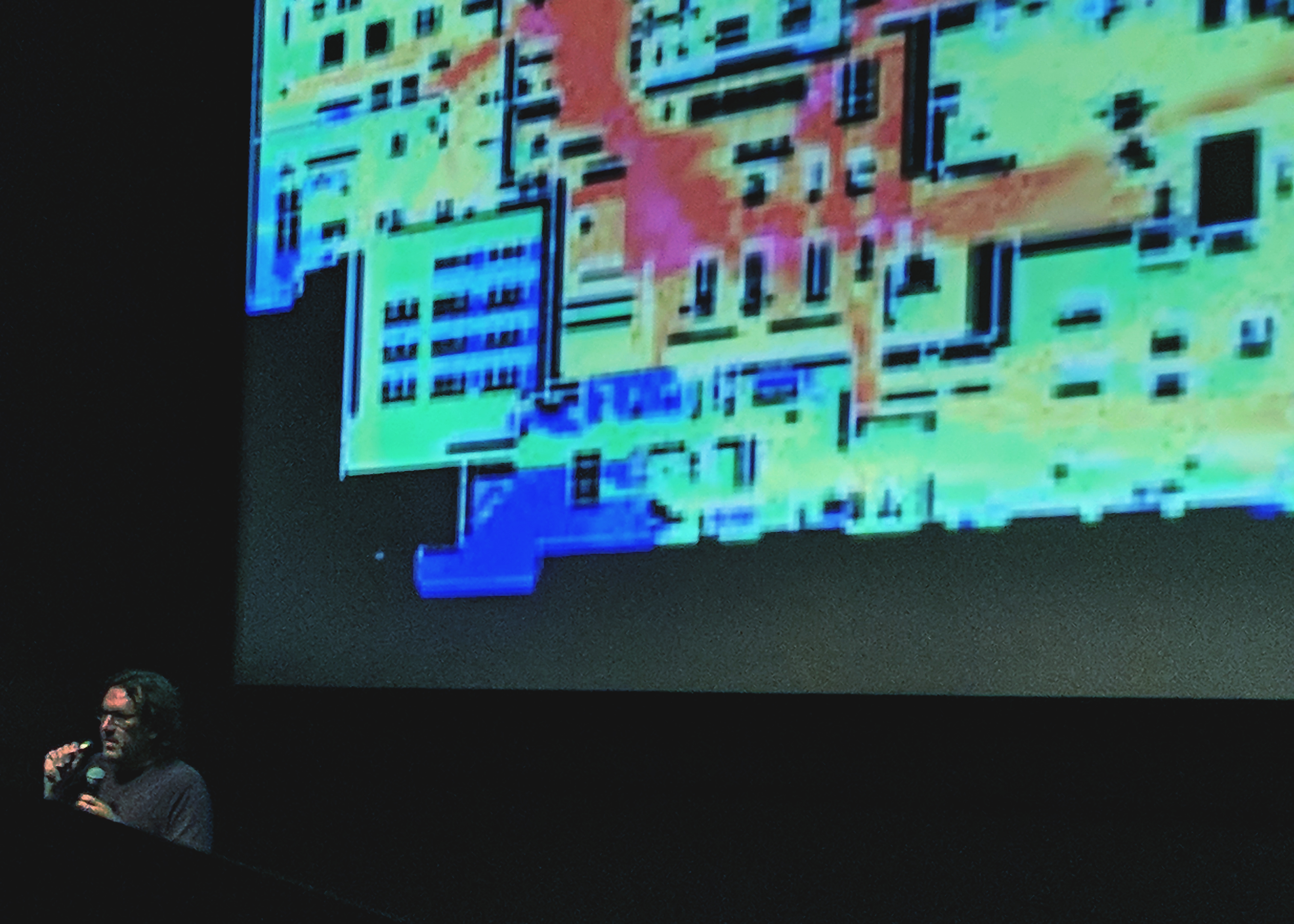 Adam’s point was the more you ask people what they want, and the easier you make it for them, the less impact you make. The simpler the experience, the more people simply ‘coast’ through without taking things in.

Essentially, Adam argued that the popular concept of ‘good design’ is actually bad.

Here’s my take on his recommendations:

The harder it is to embrace and the more disfluency it creates, the more attention it commands. Reddit? Craigslist? Facebook? Ugly as hell, but highly effective.

The more you mess it up, mix it up, and change it up, the more investment you get from your audience. Adam showed a clip of this case study on a level crossing, to showcase how familiarity can breed complacency.

Gaps force people to pay more attention. For example, Adam played us a radio ad that whispered its message so listeners would take notice and turn up the volume to hear the message.

By being overly flamboyant and offering more than is needed, you can attract more attention. Think of a peacock.

There is certainly some validity to Adam’s anti-user-centric design stance.

As Henry Ford once said: ‘if I had asked people what they wanted, they would have said faster horses.’

However, for me, this position is short sighted. Making people fill in gaps might work for advertising—when the goal is to capture attention through disruption—but try to apply that logic to creating digital onboarding processes and watch your drop-off rate hit the roof.

Still, a very interesting talk. Shame there was no time for a Q&A session so the Human Centred Design and Design Thinking crews could fight back!

Creativity: the next horizon for Artificial Intelligence. 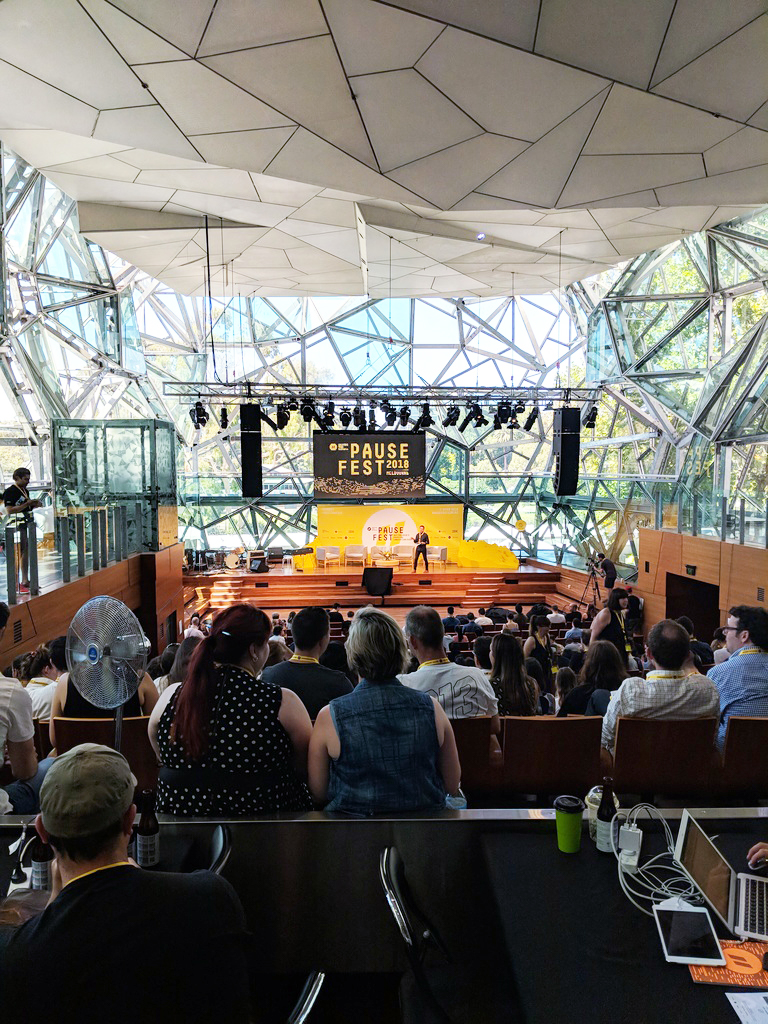 I, along with many others in the room, shifted nervously as he began, assuming a lengthy talk about human redundancy in the wake of machine-based learning. Or something equally apocalyptic.

We needn’t have worried. J.R. discussed how AI can ‘watch’ movies and then select the scenes that make the best trailers. We’re safe from artificial intelligence, it seems. For now.

Previously, a computer could watch a film and pick out different scenes or objects. For example, when a computer watches Alfred Hitchcock’s Psycho, it can pick out a shower curtain, or a car’s rear-view mirror, etc. But that’s useless when it comes to choosing the film’s best—or most alluring—scenes to cut into a trailer.

According to J.R., the technology was ‘seeing the trees, but missing the forest’.

So, the team set about creating AI to identify and understand subtler signals, such as body movement, voice, inflection, and gestures, to identify the most emotional or poignant moments.

They tested the new AI on a film called ‘Morgan’ and created a trailer in one day, rather than the usual, months-long process.

Drum-roll. Here it is:

However. J.R. admitted that the computer’s trailer had to be given to an actual editor for final touch-ups. While AI looms large on the horizon, it seems the nuance of human creativity is still the final frontier.

So there you have it. I spent the rest of the day wandering around. I checked out the various startups exhibiting in the atrium space, drank several odd-tasting—but—free cold coffees, and dropped in on a few more talks from Netflix (who were average), Gwen Gordon (who used to design puppets on Sesame St and who was excellent), and the guys from South by South West (who were very interesting).

All up, it was an enjoyable and engaging day. Well programmed, well run. Well worth going if you ever get the chance!

On transparency and empowering teams.